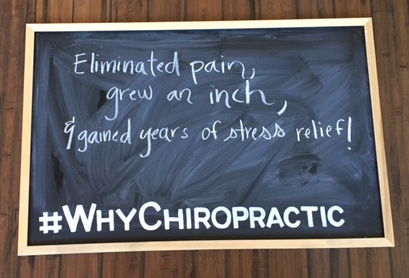 58 Year Old Man Eliminates Pain, Grows an Inch, Regains Swivel in His Neck, and Gets a Bonus Ticket for Another Couple of Years of Stress Release – All at Collins Chiropractic.

Hi, my name is Bruce and if you are unsure about the value of chiropractic care and not convinced that chiropractic is of any lasting value, then I have a story for you. I have aggressively surfed and windsurfed for 45 years and used that as my major relief from the stress of a very demanding job. Jockeying a desk for 50 plus hours a week and then turning around and engaging in impact sports over the weekend is bound to take its toll and by the early part of last year my off and on back pain had turned chronic. Significant reductions in water time and continued heavy use of NSAIDS for pain relief did not pose attractive solutions so I began looking elsewhere and was immediately intrigued by Dr. Collins when he presented a Holistic Medicine talk at my place of business. I was impressed both by Dr Collins himself as an energetic and knowledgeable speaker as well as his claim that he would prescribe and validate treatment based on x-ray analyses of the areas of distress. This was the first time I had heard that chiropractic care through objective and verifiable measures might be able to define appropriate treatment and prove that the desired goal had been achieved.

I visited the office, posed for the x-rays, and then got the bad news – good news briefing. The bad news was that I had significant degeneration along multiple portions of spinal column caused by many traumas over the years. Among other things my cervical column had a 1 inch shift to the right with most of the load being taken on a single disk, and the lower lumbar region was even worse with the lower disk compressed by over 50%. The degeneration was significant enough that I visibly twisted to the right almost like the Leaning Tower of Pisa. The good news was that Dr. Collins believed it was fixable – and the fix would be proven by x-ray.

As I evaluated options, it appeared that the worse that could happen was that I would be out time and money. If, and in my mind the if was huge, chiropractic care could actually help repair some of the very obvious damage showing on the x-rays, then both the significant time required for fix care and the money would be well spent.

I entered a three treatment a week regimen and found that positive changes were not long in coming. Through a combination of adjustment, traction, exercise, and some changes I made regarding posture, work space setup, and hydration my symptoms swiftly started to abate. Within three months I had eliminated NSAID use, regained the ability to turn my neck, and noticed a few other interesting changes – like having to readjust car mirrors because they were set too low. In fact when I went in for my annual physical – I measured an inch taller. Because this was a bit strange, I had the Dr. verify that I had measured 5’7” for the previous few years. Now I was 5’8”.

X-rays validated the improvement and showed why I should be taller. First of all, most of the twist was out of my spinal column so I was standing up straight, but amazingly, my lower lumbar disk had plumped up from 9mm to 22mm. With there being 24mm in an inch, that’s half an inch right there.

From the standpoint of pain relief and flexibility, the improvement has been significant enough that I have to be a bit careful not to overdo things on the water as I tend to forget that I am almost 60 years old.

So, would I recommend care at Collins Chiropractic to someone who was unsure of the value of this sort of treatment? By all subjective and objective methods of evaluation, symptom relieving changes have occurred along my spinal column which significantly improve my quality of life. The staff is always pleasant and engaged, the treatment itself is not uncomfortable, and the results speak for themselves. If you are reading this letter, you have obviously have symptoms that you would like relief from. Give this a type of care a chance. The worse that could happen is that you will be no better off, at which point surgery might be an option. Just remember that surgery is going to be a lot more expensive, once done is very difficult to reverse, and might permanently impair motion or function. Call me a convinced skeptic. Chiropractic treatment when appropriately evaluated, correctly executed, and the recommended exercise and lifestyle changes are followed can be a practical and safe way to eliminate the pain and suffering brought on by disorders of the spinal column.

Bruce – Out of Office